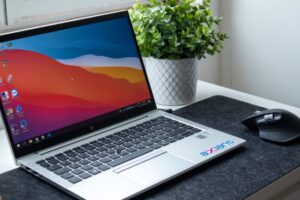 Remember that new computer feeling? Lightning fast start-up times, jackrabbit processing, and the only thing freezing were the ice cubes in your beverage glass. But over time, your computer takes longer to get going, programs run slower, and your PC starts freezing or displaying the dreaded blue screen of death.

Is it time to upgrade or replace your computer? It depends. Sometimes all you need is a bit of physical and virtual cleaning. You may even be able to get by with an upgraded processor or some additional RAM.

If you are trying to make your home as energy efficient as possible, you need to make your computer last longer. PC power consumption over the life of your machine is only about a toe’s worth of the unit’s entire carbon footprint. The real power consumption and emissions creation happen in the manufacturing process before you even take the laptop out of the box.

The Energy Involved in Technology

During its lifetime, a gasoline-powered car will consume more energy than was used to originally manufacture the car.

Microchips performing various functions are rammed into your laptop or desktop computer (pun completely intended).  The RAM in a PC is provided by anywhere from 18 to 36 two-gram microchips. Now add to that the 2, 3, or even 4 microprocessors in a multi-processor machine and you can see that those little bitty chips start to add up fast.

Microchips may be small, but the energy they require in manufacturing is gigantic. A little 2-gram microchip requires 1.6 kilograms of fuel for production according to an energy analysis. The International Technology Roadmap for Semiconductors puts the energy consumption in chip manufacturing right at 1.9 kilowatt-hours per square centimeter of the microchip. That comes out to 20 kilowatt-hours for that 2-gram chip.

Compared to the energy used in traditional manufacturing and production processes like casting, molding, or machining, you can see that as the scale goes down, energy consumption goes up.

Casting or molding requires between 1 and 10 megajoules of electricity per kilogram of material produced. To put that into perspective, it’s the electricity to run your big flat screen TV from between 1 and 10 hours – or less than the energy used in binging the latest season of Bridgerton.

Continue reading the full and original article from:  The Greener Living Blog